There is several kinds of 4 Lane Road in india constructed by central and state government in urban and rural areas, such as National Highway (NH), state highway (SH) and MDR. It will be constructed in plain or mountainous steep & hilly area.

Highway having two lanes for traffic in each direction is called 4 single lane road. 4 single lane road or four-lane road is a road that permits two-way travel & traffics, two lane in each direction, 2 lane used for going traffic and others 2 lane used for coming traffic and usually presence of median barrier and kerb at centre and enough shoulder width in side. It is wide enough to allow all types of vehicles to pass one another. A 4 lane road consists of three main component carriageway (four lane) for travelling & traffic, median barrier and kerb at centre and shoulder for vehicles to stop and accommodation.

Width of a four lane road consist of carriageway width, median & kerb width & margin width. Width of margin comprises width of pavement shoulder and unpaved shoulder. A carriageway generally consists of a number of traffic lanes together with any associated shoulder. Road margin is the portion of road beyond the carriageway.

Median barriers physically separate two opposing traffic and help stop vehicles travelling into opposing traffic lanes. They are often built on the centre of wide urban multi-lane roads where they can be used to stop pedestrians crossing the road at unsafe places. Width of median is about 4 meter.

Kerbs are the component of a highway road. A kerb also termed as a curb is a vertical or sloping member provided along the edge of a pavement or Shoulder to give strength and protect the edge of the pavement. Width of kerb shyness is about 0.5 meter both side.

Shoulder are provided along the road edge and on intended for accommodation of stop vehicles, serve as an emergency lane for vehicles and provide lateral support. Shoulder should be strong enough to bear the weight of fully loaded truck even in wet condition. Shoulder width should be required for giving working space, ideal width of shoulder should be 4.6 m and minimum is about 2.5 m. Width of shoulder also depending on available space and elevation of surface such as plain, mountainous, steep or hilly area. In Mountain area it is quite difficult to construct a road so width of shoulder is minimised and their width is less than in plain area.

As per IRC the maximum permissible width of a vehicle is 2.44m is allowed and desirable side clearance between two Lane is about 0.53m on both sides and Centre clearance is about 1.06 meter. This require minimum of lane width 3.5m.

In India, as per IRC rules and guideline, width of a 4 or four Lane Road or highway is about 26 to 27 meter wide. This includes 14 m for carriageway, 2.5 m paved shoulder and 1.5 m earthen shoulder provided on each side, 4 meter of median width at centre and kerb of 0.5 m on both sides. So while visible width is 27 meter, and their actual width may be upto 45 meter. Some more width his taken up by the embankment on top of which the road is constructed.

Width of a carriageway for 4 Lane Road

In india, as per the guidelines of Indian Road Congress (IRC), adopted lane width for national highway 3.5 m. Accordingly total width of 4 (four) lane highway or road becomes 14 meter. So width of a carriageway for 4 Lane Road is about 14 meter wide. In addition to this 4 meter of median width at centre and kerb of 0.5 m on both sides is provided

Width of the shoulder for four Lane Road

As per the guidelines of Indian Road Congress (IRC) for 4 or four Lane Road, width of the shoulder is range between 3.5 m to 4 m wide on both sides for NH and SH depending on certain condition such as elevation of soil surface, plain, mountainous, steep or hilly areas. In plain area for National and state highway, shoulder width should be adequate for giving working space, it should be 4 m wide on both side.

Width of the median for four Lane Road

As per the guidelines of Indian Road Congress (IRC) for 4 or four Lane Road, width of the median is 4 m wide, provided at centre for NH and SH depending on certain condition. It is barrier physically separate two opposing traffic and help stop vehicles travelling into opposing traffic lanes.

Width of the kerb for four Lane Road

As per the guidelines of Indian Road Congress (IRC) for 4 or four Lane Road, width of the kerb or curb is 0.5 m wide on both sides for NH and SH depending on certain condition. It is sloping member provided along the edge of a pavement or Shoulder to give strength and protect the edge of the pavement.

How to calculate cubic yards of concrete… 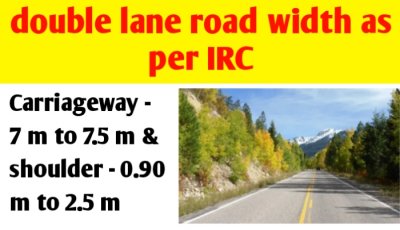 2 (two) lane road width in India as per IRC… 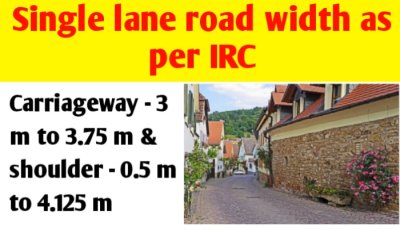 Single lane road width in India as per IRC… 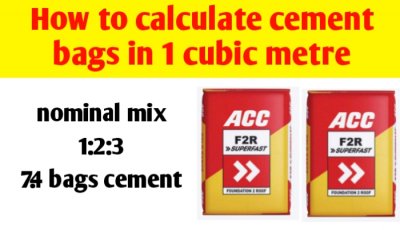 How to calculate cement bags in 1 cubic metre… 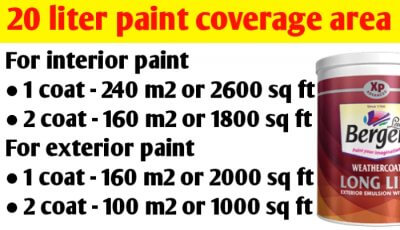