Really it is hard task to build a new house on rock, it is quite expensive for making holes in rock for Foundation. When we start our new project there is necessary to preliminary work is to layout Foundation. If houses build on rock it is quite difficult and not easy task to dig out soil in rock.

Hard strata of rock have a strong soil bearing capacity, quite stable and more durable. It has strong bearing capacity, it can provide structural support without any shrinkage or swelling. Hard rocks is made of igneous and metamorphic rocks like granite and basalt. It is distinguished from sedimentary rocks because they are typically more difficult to broken. Safe bearing capacity of hard rock like Granite and basalt is about 33kg/cm2 (3300kN/m2).

Can you build house on solid rock? It’s not too hard to build a home on solid rock. Make digging in rocky soil is not easy task, it need to be blast when when excavators can dig through your rock. The biggest thing you need to understand is the relationship between water and rock. Rainwater penetrates topsoil and starts to head into the ground. The shallow storage takes place in weathered hard rocks that occur at shallow depth that may be harmful for your Foundation. So if you build a house on Rocky soil then proper drainage system beneath the soil is required.

Issue of soft Rock causing problem in foundation:- Water present on earth seep into the ground in the direction of gravity. The rock below the Earth’s surface is the bedrock. If all bedrock consisted of a dense material like solid granite, then even gravity would have a hard time pulling water downward. But Earth’s bedrock consists of many types of rock, such as sandstone, granite, and limestone. Bedrocks have varying amounts of void spaces in them where groundwater accumulates. Bedrock can also become broken and fractured, creating spaces that can fill with water. And some bedrock, such as limestone, are dissolved by water — which results in large cavities that fill with water.

Underground storage of water below the rocky soil is harmful for your Foundation of footing that eroded the concrete face of footing and making cavity causing crack in foundation,that is major problem when you build a house on rocky soil. Make sure about water does not touch your Foundation,So if you build a house on Rocky soil then proper drainage system beneath the soil is required.

IS 12070 (1987) Bureau of Indian standard BIS code of practice for design and construction of Shallow Foundation on Rock in civil engineering section of rock mechanics.

A foundation/footing is a lower portion of building structure or substructure that transfers its all coming loads of structure to the ground. The design of size and depth of foundation depends on the total load on the building and the type of sub soil and its bearing capacity.

Foundation with depth less than 3 meter are shallow foundations. Such foundations are used for structures that do not carry much load. They are also used in case the soil has high bearing capacity. Examples of Shallow Foundation is isolated footing, combined footing, strap footing and raft footing.

Foundations with depth greater than 3 meter are deep foundations. They are deep below the finished ground surface such that their base bearing capacity is not affected by surface conditions. Examples of deep Foundation is Pile and piers formation.

How much is a bag of concrete…

How many yards to a ton… 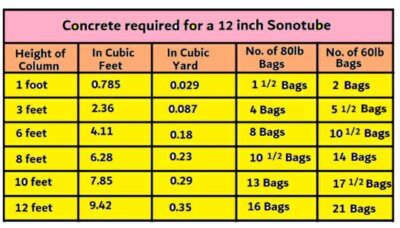 How much concrete do i need for a 12 inch Sonotube… 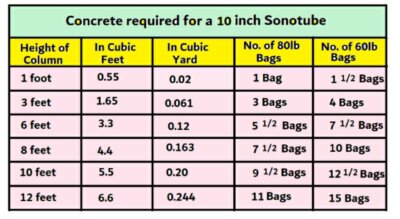 How much concrete do i need for a 10 inch Sonotube… 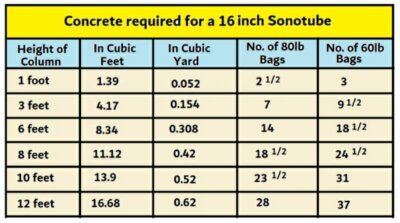 How much concrete do i need for a 16 inch Sonotube… 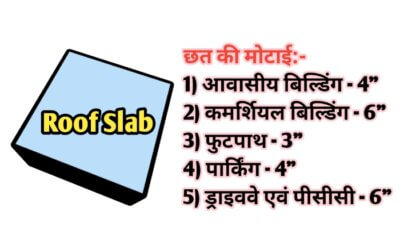